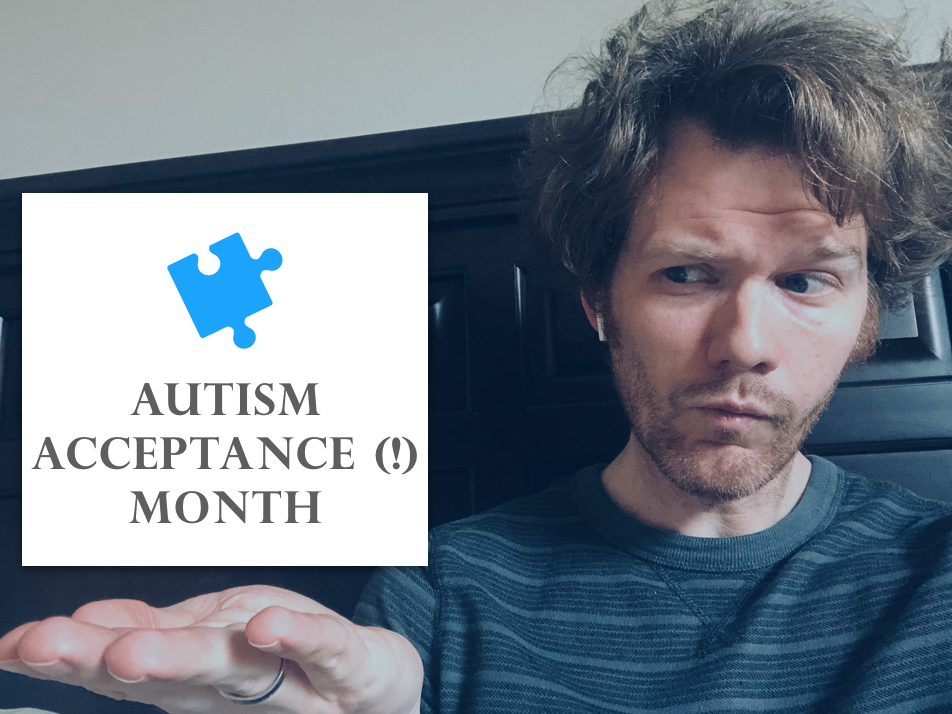 It’s National Autism Awareness Month, but let’s talk about something needed far more in our world:

We face invisible challenges that don’t make sense, that get pre-judged the wrong way, that get us dismissed.

“Oh, don’t invite him. He’s an autistic and probably doesn’t like social functions.”

“You know, I don’t care that he’s autistic: what he said was meant to hurt — I just know it. There’s no way he could have meant that kindly.”

“She’s just using big words to show off and justify it with her having autism.”

Autism isn’t anti-socialism. Autism is not “license to be a jerk.” Autism doesn’t mean we can’t understand jokes.

After 300 words, people stop reading, so let me use my word count to get to the ONE EASY STEP toward Autism Acceptance.

No really, that’s it.

Let’s revisit how it colors those three statements above.

“Oh, don’t invite him. He’s an autistic and probably doesn’t like social functions.”

Positive acceptance: “Hey, let’s invite him. Even if he might not like these, let’s show some courtesy and understanding — I’m sure he’ll appreciate the gesture or even make an appearance.”

Folks, we love when others are kind enough to let us turn down invitations. It sucks more not being invited.

“You know, I don’t care that he’s autistic: what he said was meant to hurt — I just know it. There’s no way he could have meant that kindly.”

Positive acceptance: “I was hurt by this, but there might be chance he didn’t mean to offend. He’s generally nice, and this might be out of character. Maybe we can revisit this.“

I’ve said enough accidental hurtful things to vivisect a whale. We know this is a thing, and we work really hard on it. But we’re not perfect.

Just help us by accepting that we’re not perfect and that we fall short and that, unless we’re outright mean all the time, meanness is generally not our meaning.

“She’s just using big words to show off and justify it with her having autism.”

Positive acceptance: “She definitely loves words. That’s pretty cool, and I guess it makes her unique.“

Yeah, y’all, just please back off of this one, ok?

My extended autistic family and I have plenty of awareness to go around.

But beyond that, we’d love your acceptance.

That understanding that we’re different, not less, not alien, not mean, that we see and act in a different way that’s not your normal.

3 thoughts on “The Life Autistic: One Easy Step to Acceptance”